Brussels State Secretary for Urbanism Pascal Smet has confirmed that the Brussels Region delivers a planning permit to the STIB to construct the new tram line 10.

Brussels State Secretary for Urbanism Pascal Smet has confirmed that the Brussels Region delivers a planning permit to the STIB to construct the new tram line 10.

The new tram line will connect Place Rogier with the military hospital in Neder-Over-Heembeek. It will also connect several densely populated neighbourhoods to the city centre and to several urban functions such as schools, crèches, sports centres, shops and cultural activities. The streets where the new tramway tracks will be laid will be redesigned with great attention to pedestrians and cyclists and to high-quality public space.

“My experience with tram 8 and 9 shows that you can generate a real ‘tram line effect’ by creating a project that goes beyond a mere mobility solution. We are seizing this opportunity to create a lot of new quality public space. Tram line 10 will truly enhance the neighbourhoods in Neder-Over-Heembeek and the life quality of many Brusselers,” said Brussels State Secretary for Urbanism, Pascal Smet.

“With tram line 10, we are taking another important step towards making Brussels even more accessible. We will connect Neder-Over-Heembeek to the centre and improve the life quality of locals by linking the tram line construction to the quality redevelopment of several streets and squares in the neighbourhood. This tram line is part of a broader tram plan, with which we are offering Brusselers even more freedom to travel throughout the region,” said Minister of Mobility Elke Van den Brandt.

“For the city of Brussels, tram 10 is a new step towards the project 'the city at 10 minutes'. We want to give the residents of Neder-Over-Heembeek more access to public transport and a better connection to the city centre and the other municipalities. This new line will be connected to the North Station and employees of companies in Neder-over-Heembeek, such as bpost, will be able to move around more easily. We are working closely with the Region to offer Brusselers better life quality,” added Philippe Close, mayor of the city of Brussels.

“This new tram line 10 will create the long-awaited connection between the city centre and the north of the Brussels-Capital Region, where neighbourhoods are experiencing rapid economic and demographic development,” explained Brieuc de Meeûs, CEO of STIB. “And this growth will continue in the future. The impact study projections show that between 1,600 and 2,400 passengers per hour will travel during peak hours, hence the great importance of this new tram line.”

In 2018, the previous Brussels government took a decision in principle to construct a new tram line linking the city centre with the military hospital in Neder-Over-Heembeek.

The Brussels Region, the city of Brussels and the STIB worked closely together on a project to improve the life quality and mobility of as many Brusselers as possible. Locals, shop owners and businesses were closely involved. The impact study took place between June 2019 and January 2020. In February 2020, the route of the new tram line was proposed. It will follow the route of tram 3 between Place Rogier and the Heembeek stop and then continue its way to the military hospital along Rue de Heembeek, Rue François Vekemans, Chemin Vert, Petit Chemin Vert, Rue de Ransbeek, Avenue de Tyras and Rue Bruyn.

The new tram line will be important for the development of the north of Brussels. It will ensure that the northern residents of the Region will reach the city centre quickly and comfortably and will make Neder-Over-Heembeek more dynamic.

This tram line construction is part of the Brussels Region’s wider mobility ambitions, formulated in Good Move, to offer Brusselers and visitors even more efficient public transport and convince more people to make the modal shift.

Recent examples of the new tram lines 8 and 9 already show great potential. For example, the STIB counted more than 300,000 passengers per month for tram 9 (2019 figures).

Moreover, the tram line construction offers the ideal opportunity to review public space as a whole, from facade to facade, over the entire route of about 5km, together accounting for more than 125,000 m2. The design therefore focused on comfort and safety of pedestrians and cyclists and on pleasant, accessible public space.

The final design takes a possible redevelopment of Avenue des Croix du Feu and Avenue Van Praet into account without making any preliminary assumptions on the matter.

A meeting with locals is scheduled for 20 November 2022 at the Mandela Stadium. There will also be a door-to-door distribution of flyers with practical information.

The start of road works and the laying of tramway tracks are scheduled for early 2023. Tram 10 should be operational by autumn 2024. The end of the works is scheduled for 2025. 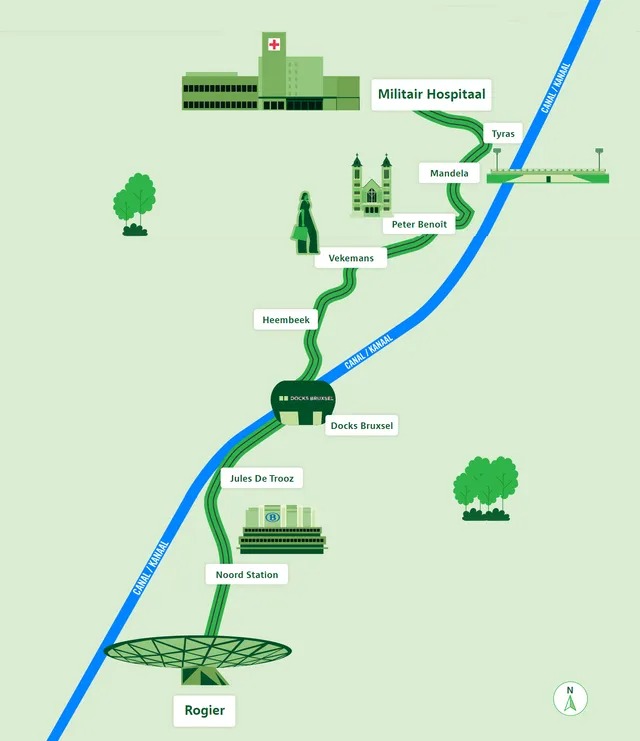