Brussels State Secretary for Urbanism Pascal Smet confirms that the Brussels Region has granted Belfius Insurance a planning permit for the thorough renovation and transformation of the Pacheco building. The building’s currently abandoned plinth will become a dynamic KU Leuven student campus with an open view to the neighbourhood and the city.

The modernist 1969 Pacheco building, which originally housed bank offices and a shopping arcade, can thus enter a splendid new future. 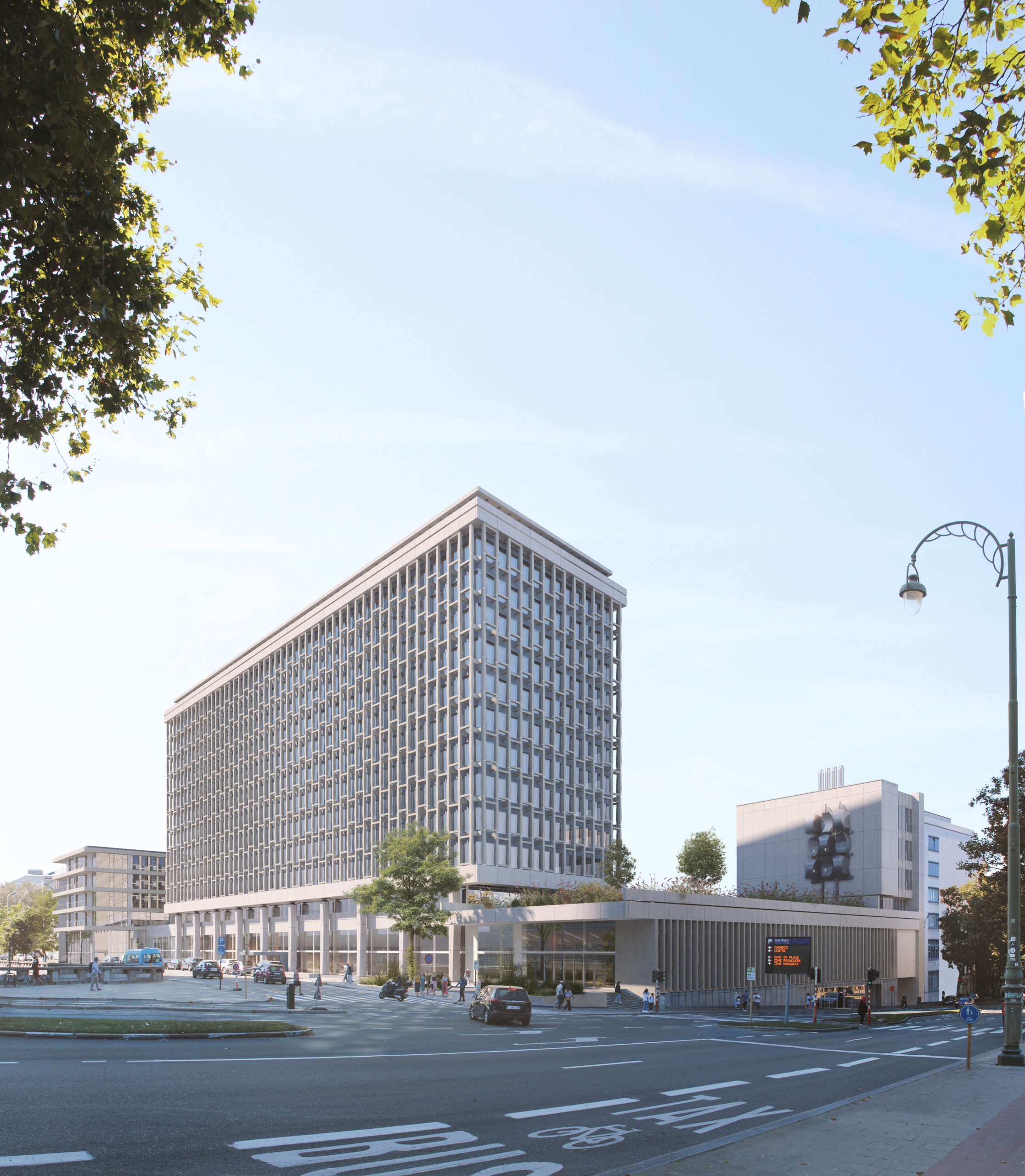 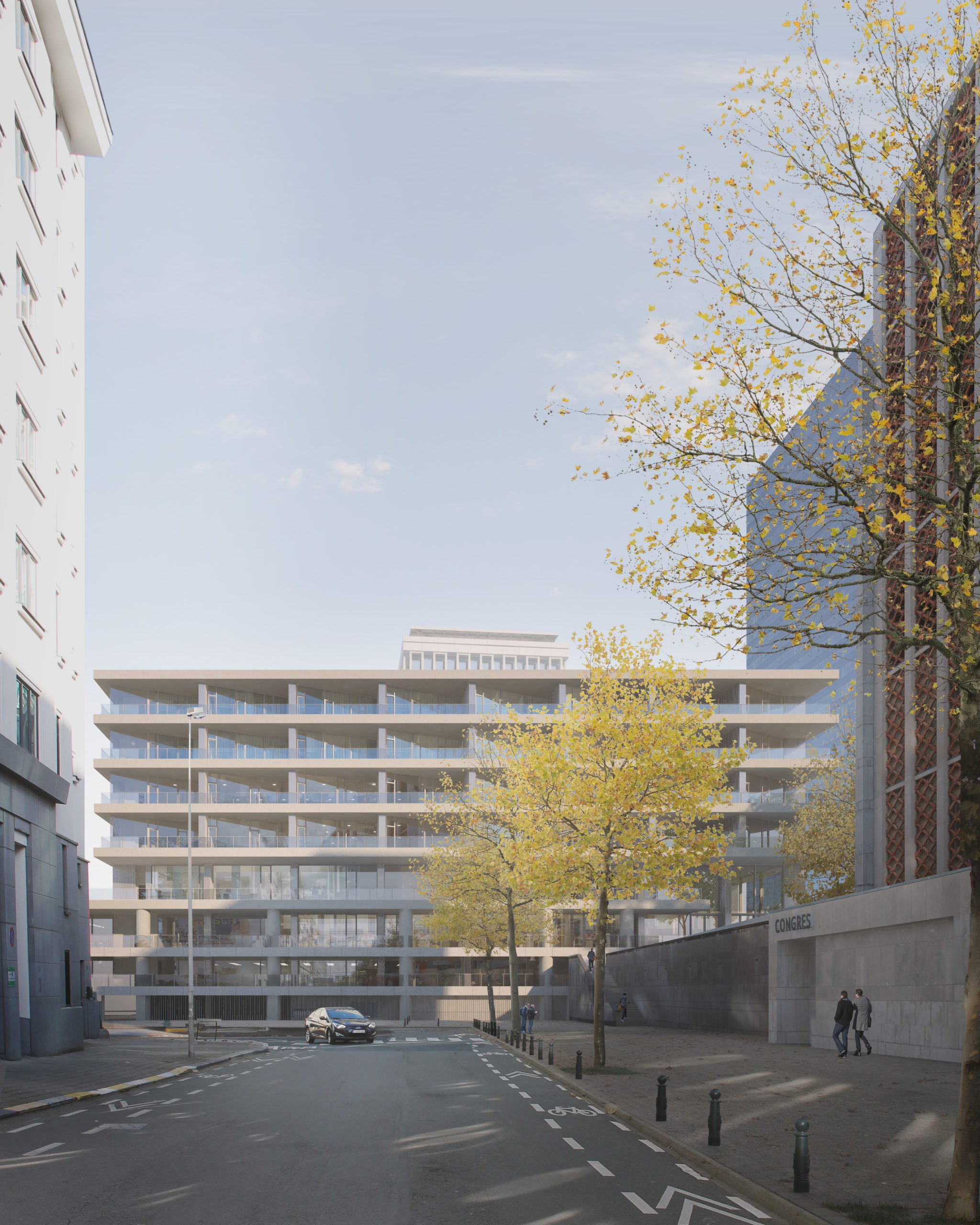 “I love it when a plan comes together,” said Brussels State Secretary for Urbanism Pascal Smet. “This new ‘Living Campus’ is excellent news for Brussels on many levels and combines many of our ambitions. Thanks to a strong collaboration with Belfius Insurance and KU Leuven, we were already able to preserve the stately Meyboom building last year and now we are giving another iconic Brussels building a bright future. We deliberately opt for renovation and for a design with great respect for the original modernist architecture. We will activate the roof by creating a beautiful roof garden with a view of the Botanical Garden. By combining numerous urban functions, we ensure activity day and night in and around the building. And we boost a neighbourhood in full development. In short, a showcase of how we do urbanism in Brussels today.”

Een jaar geleden , Brussels State Secretary Pascal Smet, together with Belfius Insurance and KU Leuven, announced that they had found a solution to preserve the stately Meyboom building on the corner of Rue des Sables and Rue du Marais. The future KU Leuven campus would no longer be in Rue des Sables, but rather in the plinth of the Pacheco building, owned by Belfius Insurance.

Today, one year later, Pascal Smet, KU Leuven and Belfius Insurance jointly announce that the entire project has now been designed and that the Brussels Region has granted a planning permit. Now the reconversion of the building, an exemplary project on many levels, can begin. Clear agreements lead to high-quality projects and thus to an efficient permit process.

“We are obviously delighted that the Brussels Region supports the plans for the site,” said Rector Luc Sels. “With this transformation, we are also taking a major step forward in Brussels. The Pacheco building renovation provides us with the necessary teaching and research space for the increasing number of colleagues and students who find their way to KU Leuven in Brussels. Moreover, we also want to use this project as an opportunity to engage with our partner universities Odisee and LUCA on new forms of teaching and working. This space is perfect for that.”

“We are delighted that the plinth of the Pacheco building is getting a great new use as a dynamic student campus. A destination that once again highlights Belfius' social role. Because investing in young people, in the talents of today, is investing in the society of tomorrow,” said Frédéric Van der Schueren, CEO of Belfius Insurance.

“Once Passage 44 was a popular cultural and commercial pole in the city. After years of abandonment, the place is now getting a new purpose. KU Leuven's project is the first in a long line of developments that will breathe new life into stately administrative buildings on Boulevard Pacheco. At the same time, the city of Brussels is working with landscape architect Bas Smets on a master plan to address public space,” said Brussels Alderwoman for Urbanism and Public Space, Ans Persoons.

Belfius Insurance commissioned the Belgian architecture team a2o-WIT for the architectural design. This team was selected after a public architecture competition organised by the Brussels Bouwmeester/Maître Architecte (chief architect).

The current building will be preserved and revalued. The currently abandoned plinth, the former ‘Passage 44’, will receive an active function and will be much better integrated into the surrounding public space than it is today.

In addition to the renovation and conversion of the plinth, there will be two new volumes on the plinth and René Pechère’s famous roof gardens will be restored.

A “Living Campus” of KU Leuven in the plinth

KU Leuven’s “Living Campus” in the plinth of the building will be the project’s beating heart. This contemporary teaching and research environment will house auditoria, classrooms, a learning centre with library, practice rooms and meeting spaces. Together, they will add up to a university building of around 21,000 m².

The “Living Campus” aims to encourage and facilitate interactions and this vision is also reflected in the design. Not only in the design of the interior spaces, but also in the interaction with the surrounding public space. For instance, both the car park entrance on Boulevard Pacheco and the “glass cube” will disappear, making room for comfortable residential space with trees and plants.

The total surface area of the two volume extensions on the plinth amounts to 7,000m². Among other things, landscape offices, student residences and common dining and living spaces can be provided here.

On the one hand, a new building volume will arise at Boulevard du Jardin Botanique, only taking up the space above the current parking entrance. The large open space on top of the plinth will thus be preserved and transformed into an accessible new roof garden, with a view of the Botanical Garden.

On the other hand, there will be a new building volume at Rue de l’Ommegang, which will be coordinated in height with the adjacent buildings, creating a harmonious whole in Ommegangstraat.

The existing volume on the plinth and the underground Interparking garage will be retained entirely.

In addition to the attractive “Living Campus”, the magnificent roof gardens designed by René Pechère, with various works of art, such as “The Nine Provinces” by Jacques Moeschal, as well as the Culot wall will be the project’s eye-catchers.

KU Leuven’s new campus will be very accessible, with the Botanique metro station and the Brussels-Congress train station located a few metres from the campus, the North and Central Station and the city centre within walking distance and separate cycle lanes currently being constructed along the entire small ring.

But it is also a highly strategic and future-oriented location in the heart of the European capital. On the initiative of State Secretary Smet, the nearby grey Northern Quarter will be transformed in the coming years into a lively district with new housing, offices, hotels and restaurants, public space, leisure facilities and a new tram line. The presence of KU Leuven and its students, as well as those of partner universities Odisee and LUCA, will enhance this metamorphosis, and interaction with the metropolis will be a major asset for KU Leuven.

In parallel with the development of the Northern Quarter, landscape architect Bas Smets is currently developing a master plan commissioned by the City of Brussels that will rectify the barrier of the north-south train connection and better connect the upper and lower town.

Last year's solution found by State Secretary Pascal Smet, KU Leuven and Belfius Insurance means the stately Meyboom building on the corner of Rue des Sables and Rue du Marais will be preserved. Belfius is currently working on plans for the future of this building.