Pascal Smet, Brussels State Secretary for Urbanism, confirmed that the Brussels Government today granted a planning permit for the renovation and extension of the site of the former postal sorting office at the Brussels-South station.

Pascal Smet, Brussels State Secretary for Urbanism, confirmed that the Brussels Government today granted a planning permit for the renovation and extension of the site of the former postal sorting office at the Brussels-South station. 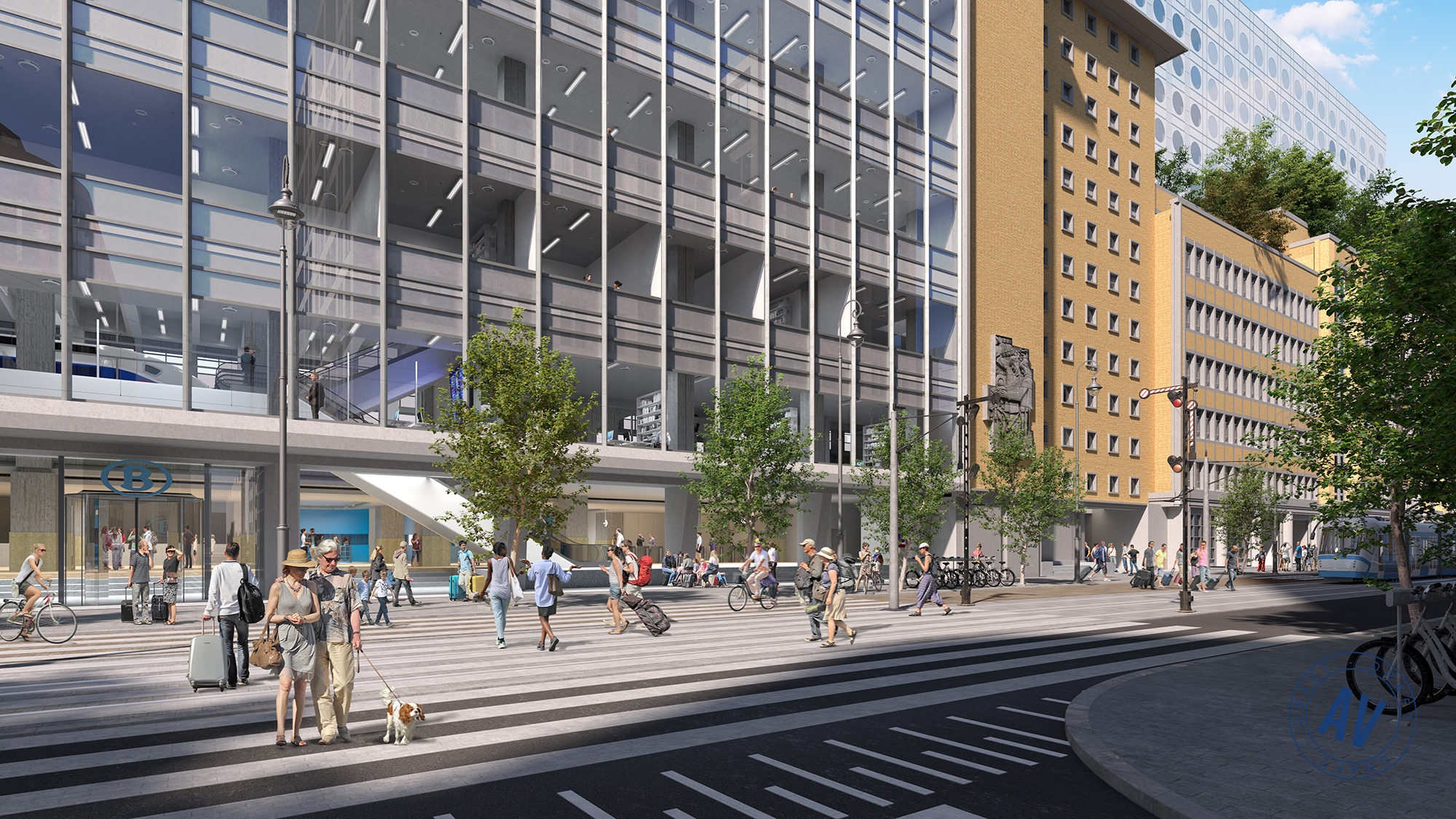 The Brussels Government today took the final decision to issue a planning permit for the renovation and extension of the SNCB buildings on the site of the former postal sorting office on Avenue Fonsny in Saint-Gilles. The works will be commissioned by the SNCB, which will use it for numerous operational activities. The renewed site will become a new gateway to the city for the tens of thousands of train passengers who arrive there every day. In this way, not only the station itself will be upgraded, but also the entire neighbourhood. The design pursues a respectful revaluation of unique Brussels heritage, in which the existing buildings will be thoroughly renovated with a new, linear volume on top. Special attention will go to sustainability, such as energy and water consumption in the renovated buildings. Explicit account has also been taken of the relationship between the building and the surrounding neighbourhood.

“The project's architecture is top-notch. Le Tri Postal - the former postal sorting office, has great heritage value and will be preserved and upgraded, bringing back its soul. The building will be completed by a contemporary eye-catcher. A beautiful interaction between old and new. And for me this also symbolises Brussels, where we respect our past, but also have to look to the future with an open and ambitious mind. This project should be the starting point for a much-needed metamorphosis of a neighbourhood that has been neglected for far too long, the gateway for many people to our city and country. This neighbourhood deserves more ambition and pride and this is a good start,” said Brussels State Secretary for Urbanism and Heritage, Pascal Smet.

“The government reaffirms its support for the planned headquarters of the SNCB at Brussels-South Station. This is an important step for the neighbourhood and its future. Indeed, the station plays a strong historical and symbolic role. In the coming years, many urban renewal funds will be invested in the neighbourhood to support and complement this project, in order to offer a quality environment to locals, Brusselers and visitors to our capital,” said Minister-President Rudi Vervoort.

Urban.brussels already granted a planning permit for the project in August. However, the municipality of Saint-Gilles appealed against this decision. This appeal has now been rejected by the Brussels Government, who now gives final approval to the permit.

The project is a design by internationally renowned architecture firm OMA, in cooperation with Belgian firms Jaspers-Eyers and Assar Architects.

The building at Brussels-South station will thus become OMA's first building in our country. OMA created numerous award-winning projects outside our borders, such as “Kunsthal” in Rotterdam, “Casa da Musica” in Porto, “Seattle Central Library” and “New Court Rothschild Bank” in London.

The project will be an urban development landmark. The three monumental buildings on Avenue Fonsny, the former postal sorting office and the two flanking office buildings, will be preserved and thoroughly renovated. The buildings in typical yellow brick go back to 1957. They were built at a time when the railway and postal service were still strongly connected. Today, the buildings have been empty for more than 20 years. Since 2019, however, part of the building was given temporary use. The non-profit association Communa, together with local associations, gave temporary life to the building by creating functions such as a dance studio, a reception point for the homeless, a neighbourhood cinema and a FabLab.

During the thorough renovation of the existing buildings, the typical elements of the exterior facade will be highlighted. Several interesting interior elements will also be preserved and restored.

A lively building opening up to the surrounding neighbourhood

Today, the former postal buildings form a blind wall of more than 370 metres along Avenue Fonsny. This will change. The ground floor on the street side will be activated. In addition to a spacious main entrance, several shops, bars and restaurants will bring life to the neighbourhood. Unlike today, the building will have a much better connection to the surrounding public space. The station entrances on Avenue Fonsny will be integrated into the project, will have much more light and will open up towards the city. This will increase the station's visibility and attractiveness.

A new linear volume in height, well integrated into the surroundings, with accessible roof terrace

A new linear volume of 239 by 19 metres, parallel to the train tracks and platforms, will be added on top of the revalued building. The building is characterised by large round windows. This new volume will be located on the side of the tracks, at greater distance from the street, limiting its visual impact from street level. Moreover, this will free up space on the roof of the existing buildings on Avenue Fonsny, which will be used to create roof gardens and terraces. Sustainable renovation is crucial in the site's renewal. It will be a passive building, with solar panels on the roof of the new linear volume and special attention to biodiversity and the upcycling of materials.

The building’s total height, with the new volume, will be 60.55 metres. The new volume on top of an existing building will create many extra square metres of usable space without having to fill a new terrain. However, the final design counts one storey less than the one proposed during the architectural competition. After consultation with various stakeholders, this final design reduced the number of floors by one to ensure smooth integration into the surroundings and to align the volume height with the one of the existing buildings nearby.

The renovated site will not only be a new gateway to the city and an upgrade of the entire neighbourhood, it will also become the new SNCB home with, in addition to office space, meeting and training spaces and other facilities such as a green roof terrace that will be open to all outside office hours. The building will house the essential functions for national train traffic, making it the nerve centre of real-time train traffic management in our country.

In addition to offices, the new SNCB headquarters will include conference and training rooms, an auditorium, a fitness centre and a restaurant with roof terrace. A separate visitor access will be provided to the restaurant with roof terrace, so that Brusselers could also use it in the future. The centralisation of the SNCB offices in the new headquarters will free up several existing buildings in the area. This will create new opportunities to develop other urban functions, such as housing. They include the “France-Bara” and “Delta-Zennewater” buildings in Rue de France and “Atrium” in Avenue de la Porte de Hal. The latter today forms a large blind wall along a great part of the small ring. A redevelopment of the building by activating the ground floors would be a great asset for the area.