State Secretary for Urbanism Pascal Smet confirms that the Brussels Region has granted a planning permit for The Dome, the redevelopment of the emblematic building on the corner of Place de la Bourse and Boulevard Anspach.

State Secretary for Urbanism Pascal Smet confirms that the Brussels Region has granted a planning permit for The Dome, the redevelopment of the emblematic building on the corner of Place de la Bourse and Boulevard Anspach.

The Dome, the name given to the project of developer team VDD Project Development en Vervoordt r.e., will be a multifunctional building with retailers, restaurants, offices and dwellings. The design is characterised by its architectural appeal and provides a building full of character, with great respect for its history and surroundings. The integration into the surrounding public space and the various urban functions that will have a place in the building are also key features of the project. The renovation of this iconic building in this unique location in the heart of the city will be a milestone in revitalising the Brussels city centre.

“Our decision to qualitatively redesign the central avenues and give them back to the people was one of the best decisions in Brussels in recent decades. We can now see its effect in the wider area. Numerous buildings are being thoroughly renovated, bringing a new dynamism to the city centre, such as the Bourse building, the Multi-tower, le Grand Café and now The Dome. We are bringing back the former grandeur of the central avenues,” said Brussels State Secretary for Urbanism and Heritage, Pascal Smet. 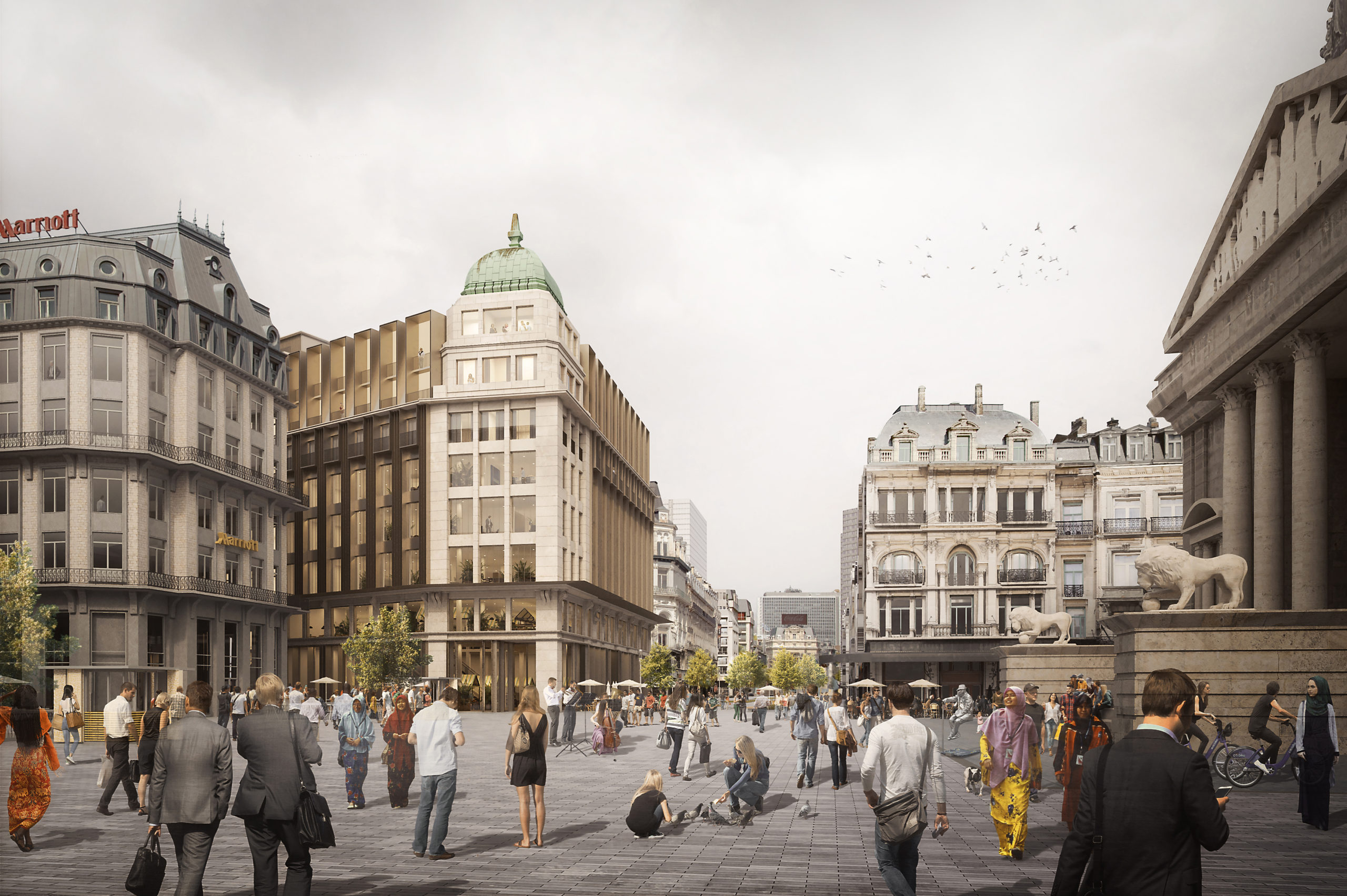 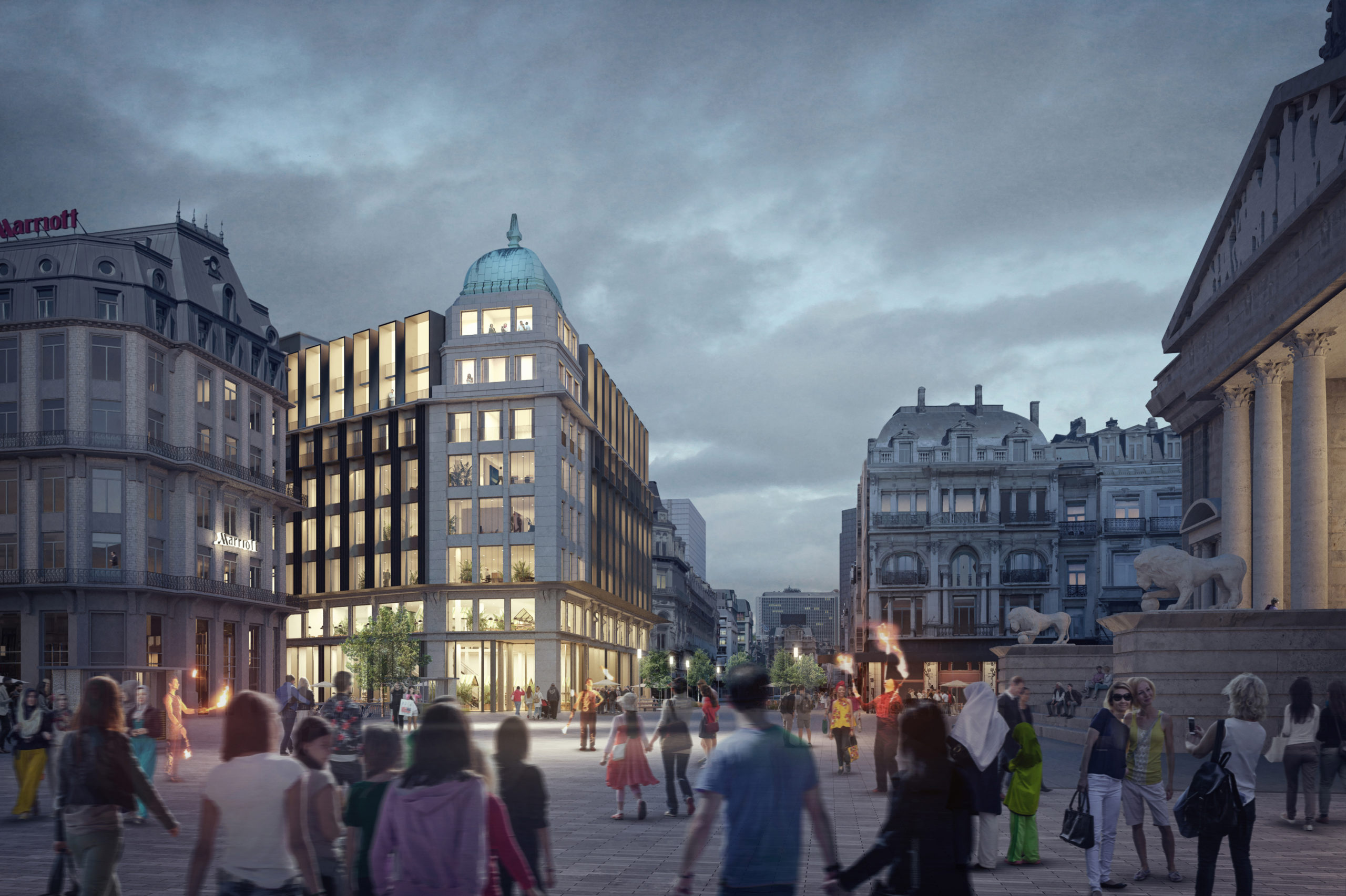 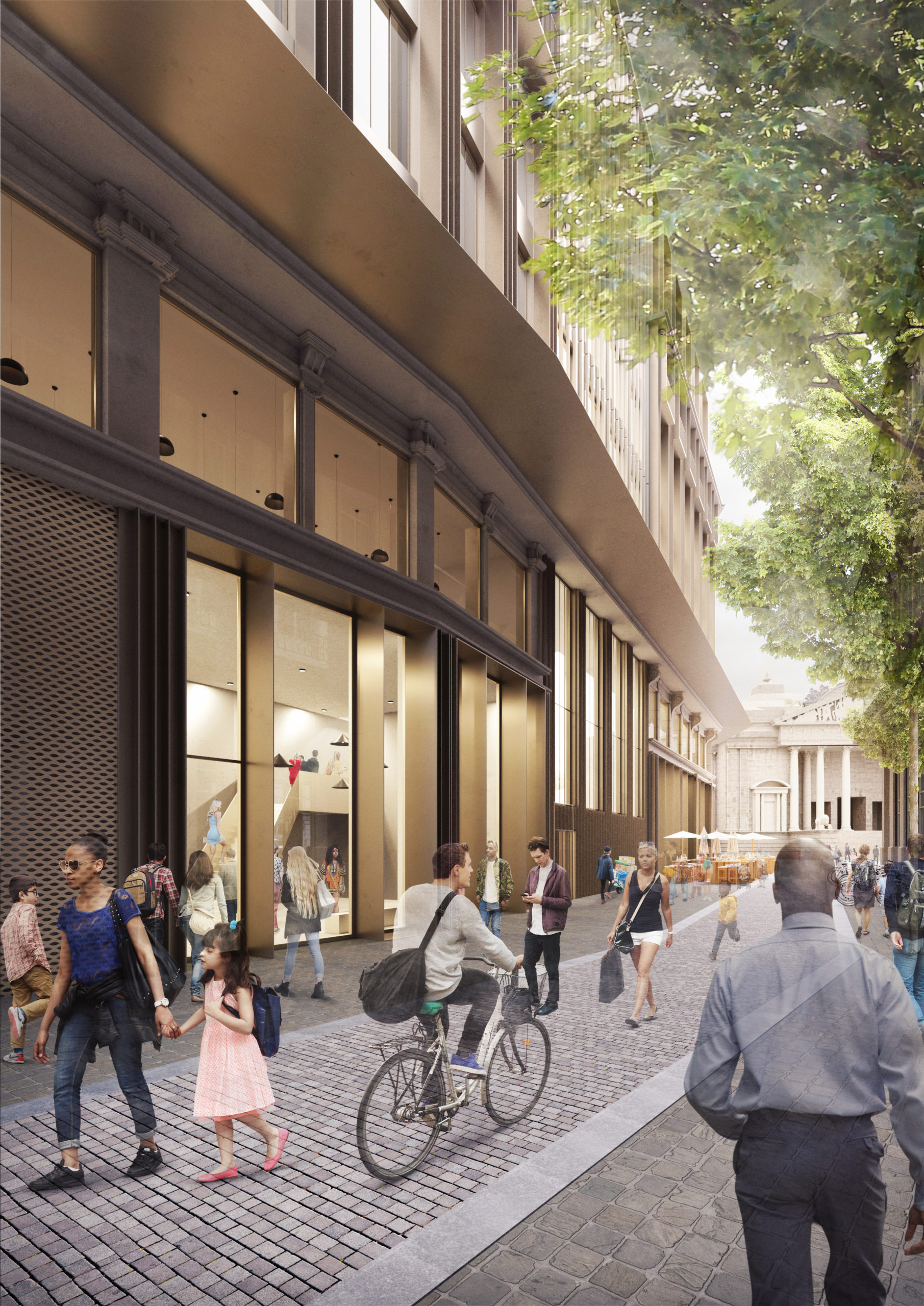 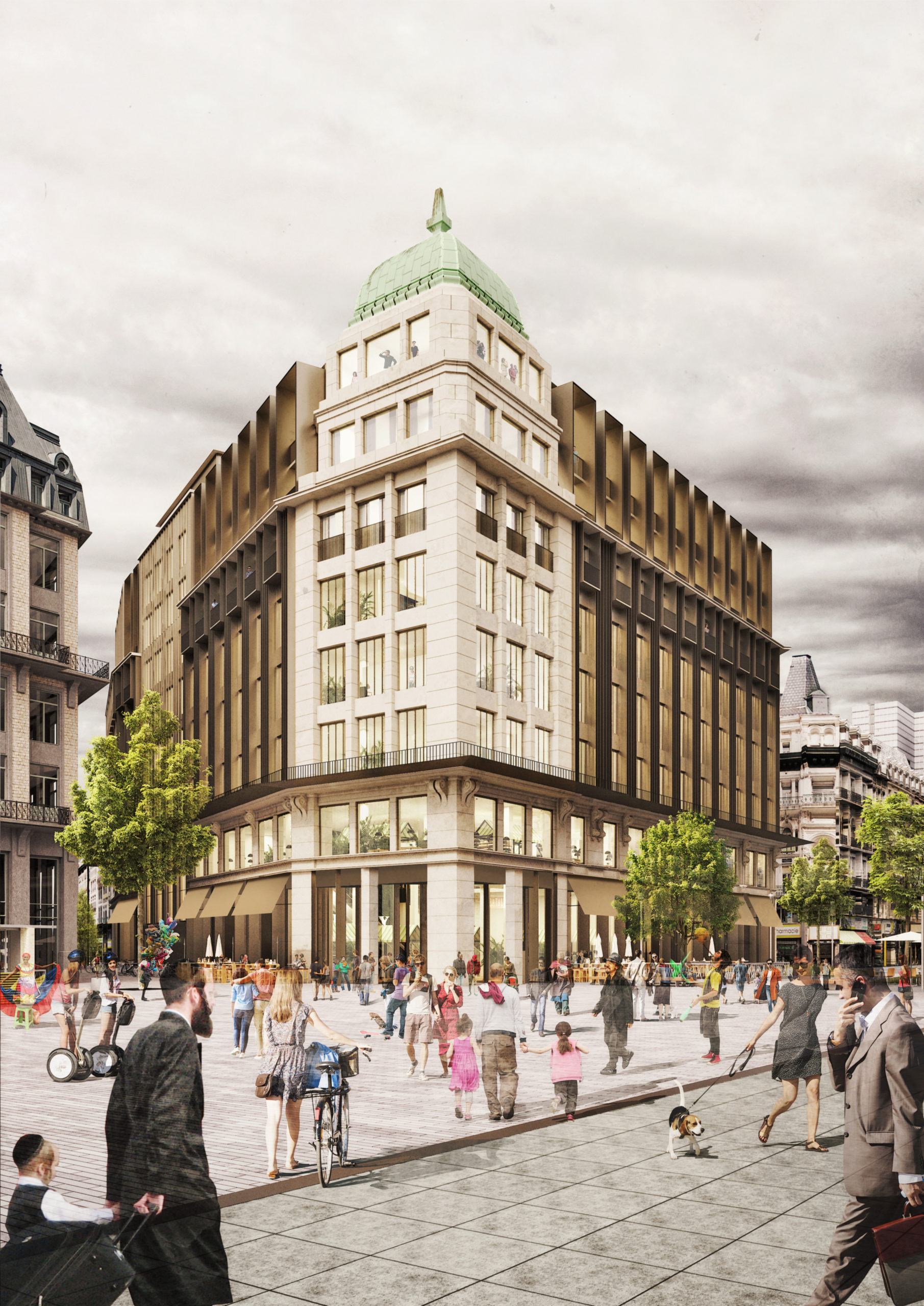 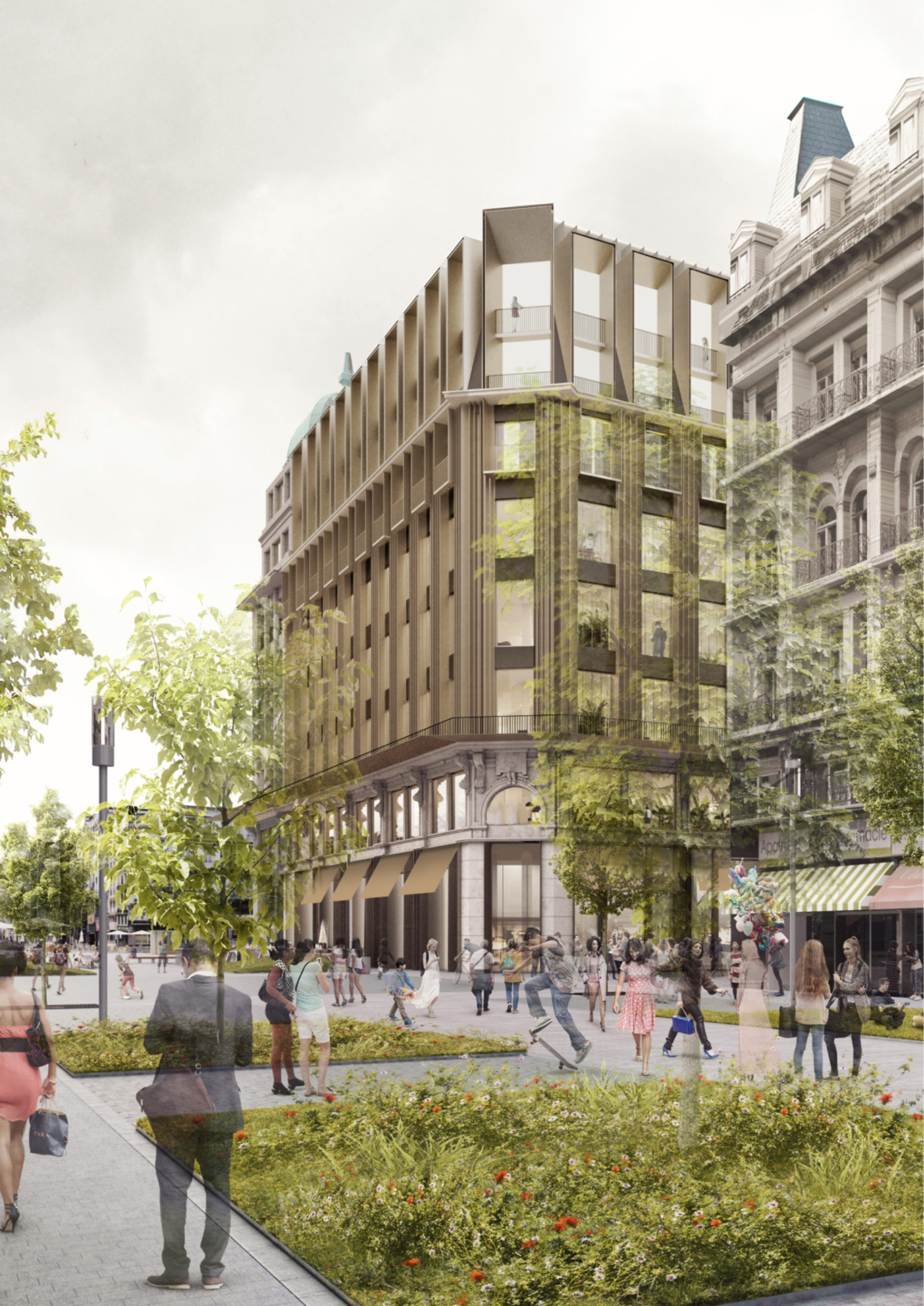 “'The Dome' is a new economic and housing project in the pedestrian area of Brussels. As other real estate examples have already shown, the city centre is evolving and more and more investors are opting for our urban policy. The city wants to be a constructive partner in this ambitious project," said Philippe Close, mayor of the City of Brussels.

"The Dome project will continue the revalorisation of the historic city centre, through a high-quality, attractive architecture and programme that will define the experience of the entire area. The building will have a new future, restoring its historical grandeur and reinterpreting the Hausmannian architecture in a contemporary way. This contrast will give the building a contemporary identity and will further reinforce the beacon function of the iconic tower with roof dome. In this way, a new page is being written in the history of this emblematic location in Brussels, which will become the meeting place of all," says Johan Vandendriessche, managing partner VDD Project Development.

The Dome, which refers to the impressive copper roof dome that opens onto Place de la Bourse, was called “Les Grands Magasins de la Bourse” when it was built in the 1870s and housed Belgium’s first department store. In 1948, the building suffered heavy damage in a fire, and in 1970 it was converted into an office and retail building and renamed “Bourse Center”. Among others, it housed the Actiris offices until a few years ago.

The Brussels Region sold the building in 2018 with the aim of bringing back its soul and giving it a multifunctional use. The Brussels Urban Development Corporation “SAU” launched a call for the sale with conditions to be met by the building's future development. 16 developers applied. After a selection procedure involving urban.brussels, the Brussels Bouwmeester/Maître Architecte (chief architect), the City of Brussels and SAU, the proposed revalorisation project by VDD Project Development and Vervoordt r.e. was selected. Its strong vision of a qualitative and sustainable future for this historic building made the difference. During the project preparation, the building was given a temporary use with, among others, coworking spaces, artists’ studios and a rooftop terrace.

VDD Project Development and Vervoordt r.e. will be cooperating with the renowned architectural firm Coussée & Goris, known for a.o. the city library “De Krook” in Ghent and the visitor centre of the “Zwin” in Knokke-Heist. The design reinterprets the Haussmannian architecture that characterises the central avenues and gives the building back a strong architectural identity. Indeed, the vertical facade elements will be accentuated, the mansard roof will be replaced by streamlined dormers, balconies will be introduced under the eaves, the canopy will be vigorously designed and the elements with historic value, such as the dome, will be highlighted.

The building's plinth will entirely open up and interact with the surrounding public space, inspired by the original function of “Les Grands Magasins de la Bourse”. The city will be drawn into the building, as it were.

Italian company EATALY will make its long-awaited entry into the Belgian market. Its concept will cover the ground floor on the corner of Place de la Bourse, Boulevard Anspach and Rue Paul Devaux, and the entire first floor, for a total of 3,500 m².2In this culinary hotspot, lovers of Italian food will be able to fully enjoy the food-court concept with restaurants, cafés, an Italian fresh and supermarket and a training centre.

Delhaize will be located on the corner of Boulevard Anspach and Rue du Marché aux Poulets, with a new urban concept on the ground floor and a classic supermarket in the basement, for a total of 2,200 m².2.

On the second, third and fourth floors, 7,500 m² of state-of-the-art offices will be provided, connected by an imposing glass atrium at the heart of the building and a roof garden.

The fifth to eighth floor will feature 55 rental flats, between 38 m² and 105 m² , according to the co-living concept. These are smart, high-end apartments with an attractive range of facilities and various common areas such as relaxation areas, roof terraces and rooftop gardens. In this way the team provides an answer to the ever-growing demand for affordable, sustainable and efficient housing.

The Dome is an exemplary project in terms of sustainability and ecology. In addition to circular construction, various modern and sustainable techniques, such as solar panels, heat pumps and maximum recovery of the heat and cooling produced, have been chosen in order to consume as little as possible. Finally, soft mobility plays an essential role, with 144 parking spaces for (cargo) bikes and only 5 for electric shared cars. The project aims to obtain the BREEAM Excellent certificate and fully meets the ambitions of the Brussels Region to provide high-quality, multifunctional and future-oriented buildings.

The works will start in the first quarter of 2023 and would take 2-3 years.

The Dome is not the only renovation project in the central avenue area. Public space redevelopment has clearly been a catalyst for private and public players to renovate buildings and give them new, future-oriented, functions. Just think of the Bourse building, the Multi-tower, The Mint and OXY, the renovation of Ancienne Belgique, Brouck'R and several smaller renovation projects bringing back the former grandeur, such as the renovation of the canopies in Rue de la Bourse, le Grand Café and the pharmacy on the corner of Boulevard Anspach and Rue du Marché aux Poulets.